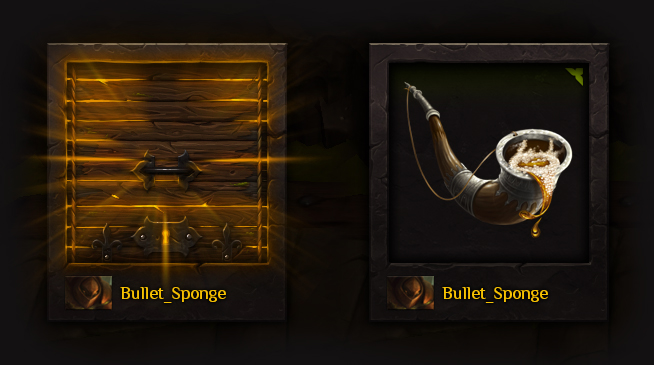 In Sins of a Dark Age, players collect loot after every Quick Play match (Custom matches against bots do not award loot). Loot can also be bought, sold, and traded on the Steam Marketplace. Loot is randomly distributed and comes in the form of a variety of items that exist across one of many rarity tiers—Artifacts being the most desired and Trash being the least, though even Trash may eventually come in handy. Gather the right loot and you can craft Hero Gear, Skins, and other items to customize your Sins of a Dark Age experience.

Skins are a unique visual theme for one of the games various Heroes. From the details of the Hero's in-game model, to custom color schemes, particle effects, and even VO, they combine to create a new "flavor" of the Hero, mixing things up to appeal to a variety of fans. For example, if you've always wondered what Grugg would be like if he hadn't escaped the Alchimians, you could roam the jungle using his Abomination skin. Or perhaps you prefer your undead lords to be incorporeal; in that case, try Dekain's Spectral skin. Skins are a way to show off to other players, and to get to know your favorite Heroes even better. Though in most instances Skins will need to be crafted by players, there is a also a chance that they will drop directly as loot.

Hero Gear is one of the best ways to customize your game experience, and to build a more powerful version of your favorite Hero. These weapons and armor are constructed from crafting materials and recipes (and sometimes received as loot), and can grant your Hero subtle in-game bonuses—for example, the Battleborn Axe provides Heroes with 2 Attack Power for every enemy Hero within range. As you level up your account you earn Gear Points which allow you to slot stronger and stronger Hero Gear before each match. You can only slot a maximum of four gear items at a time. Note that Hero Gear cannot be purchased directly from Ironclad, and players must level up their accounts to take advantage of whatever Hero Gear ithey have. This is not a "pay to win" system, but a way to grow into your skill and improve as a Sins of a Dark Age player.

Items from the first six rarity levels can be received by players as loot, becoming more and more uncommon as you travel down the list. The latter two rarities are reserved for items that must be purchased from the in-game store (ex: the Founder Skins), or that have been or will be discontinued and can no longer be purchased. Players will never receive them as loot, though they make luck out on the Steam Marketplace.

The Steam Community Market is a great place to find skins, recipes, chests, and crafting materials for cheap, or to sell your own excess stock! Similar to Steam Trading cards, you can buy and sell each of these in-game rewards for profit, or trade with other Steam players if you'd prefer to keep things non-pecuniary. On the market you can name your own price. Steam provides tools by which you can track the average sales (and average price) of the item in question, making it much easier for you to find the sweet spot between supply and demand. Both Ironclad and Valve receive a slice of every Community Market sale, so even when you're buying a Skin from Artyom in Ukraine, you're also supporting your favorite developer.

Retrieved from "https://soada.fandom.com/wiki/Loot_%26_Crafting?oldid=5701"
Community content is available under CC-BY-SA unless otherwise noted.