Sins of a Dark Age Wiki
Register
Don't have an account?
Sign In
Advertisement
in: Veric Camp, Veric, Creatures,
and 6 more

View source
watch 01:36
We're Getting Mutants in the MCU - The Loop
Do you like this video?
Play Sound

This unit has increased Attack Speed at Night.

Upon death a cloud of toxins is released from the Veric's corpse, dealing constant Magic Damage to any enemies who enter the area.

This unit has increased Attack Power. (Doesn't apply to Veric King itself.)

A large monster with a melee attack and an aura that makes other verics more powerful.

A Veric King before its recolor 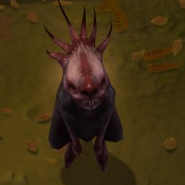 A Veric King on its hind legs. A real stand-up guy!